Pou is a virtual pet app developed by Zakeh and released for Android and BlackBerry on the 5th of August in 2012 and later on iTunes on the 13th of march in 2014, it soon became viral and was rated 4.3 by the players. The Game Had Over 100 Million Downloads Since 2019.

Pou is an alien that is a round edged triangle shape. Pou comes in a tan colored body.

Its appearance may change depending on the player.

Pou has four status bars, the hunger bar, the health or vitality bar, the happiness bar, and the sleep bar. These affect the gameplay.

Pou is fed by dragging the various foods to it's mouth. Certain foods affect Pou's other stats too. On some occasions, especially when fed the same food over and over again, it will refuse to eat the food and make a "no" sound. Pou's hunger increases over time. This will drain the health bar.

Pou's vitality is drained over time. The rate at it is draining is increased if the food or sleep meter is at 0%.The potions that are used to maintain Pou's health are quite expensive and should be used sparingly.

Pou simulates parenting as the baby and the player as the parent; it is quite realistic. The player can feed Pou, play with it, tuck it in to sleep, give Pou medicine, clean it, talk to it and dress it up.

Pou as a baby 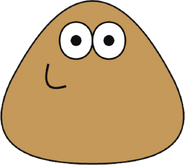 Pou As Adult.
Add a photo to this gallery

Retrieved from "https://pou.fandom.com/wiki/Pou?oldid=6441"
Community content is available under CC-BY-SA unless otherwise noted.